Everything you need to know about Fork, Hard Fork and Soft Fork 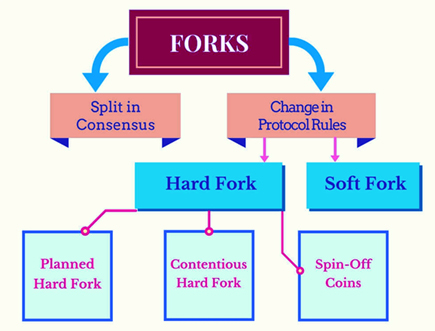 A hard fork is a term which is related to blockchain technology, derived from cryptocurrency. This software upgraded version is not compatible with the previous versions. A hard fork is a protocol that is primarily used to make changes in transactions of cryptocurrencies mostly for Bitcoin and Ethereum. It has created a phenomenon with some radical changes in blockchain technology for specific separation. Now users can resolve their trends automatically with the help of it. Explaining hard forks is a bit tricky due to various emerging issues.

A hard fork is an alternative of Bitcoin classic. Due to the emergence of Bitcoin cash, now there are two separate models of Bitcoin on the market. Implementation of a hard Fork is quite essential as users who have not upgraded yet will be cut out from the cryptocurrency network. They will not be able to validate the new Bitcoin or Ethereum transaction policy. A hard fork is a new upgrade to correct security risks found in previous versions. That is why a new functionality is added to prevent the hack on the DAO (Decentralized Autonomous Organization) in the blockchain technology. 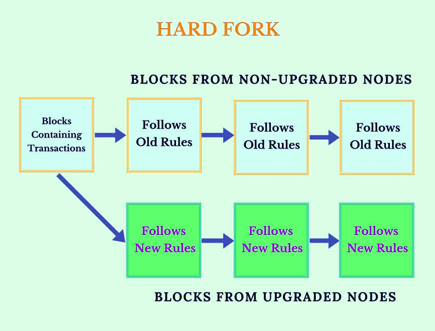 The hard fork has two different types, planned and disputatious. Let’s see what these can do.

1. Planned Hard Forks: A planned hard fork is a protocol update in a new cryptocurrency version to emphasize the blockchain’s capabilities and user compatibilities. It is actually headed by the core coders since this upgrade makes the changes in codebase so that a new crypto coin can be created without any hurdle. The example of a planned hard fork is the Ethereum Byzantium. This one is the Ethereum’s second phase upgrade. Another example is the Monero. This one is an upgrade to enhance the privacy and security for a confidential transaction.

2. Disputatious Hard Forks: It is basically an improvement of a significant upgrade of the core code by creating a new chain within the crypto community like the Bitcoin cash creation. It is also an improvisation of Bitcoin’s second phase. It is an upcoming updated version of Bitcoin Gold and Segwit2x. The first example of the disrupted hard fork is Bitcoin cash. It is developed by the core coders of the crypto community to increase the block size from the latest 1mb to 8mb. Due to the increased size, it will give the users an opportunity for more cryptocurrency transactions and also the bigger size will help to reduce the cost users pay.

The second example is Ethereum classic. It has a reverse effect if someone tries to hack any application of DAO. To preserve the changes in the Ethereum blockchain, their core developers went with the upgraded version, and others stayed with the older one which is called Ethereum classic (ETC).

Now let’s check out the benefits of hard forks, why users consider it as the most advantageous.

1. Control: Hard forks upgrade provides an exceptionally smooth control to all of its users due to its newly added function.

2. Trustable: This upgrade offers a very secure passage to its users for Ethereum transaction whether you are buying or selling. This is built with complex data and number that can be accessed by the account owner only. That is why it has become impenetrable to breach the code.

3. Irrecoverable: The system is built in such a way that after completing a transaction, nobody can reverse it.

4. Single User Based: It comes with the user detect verification system. According to it, only the account owner can do the transaction.

5. Prevent Threats:It identifies the transaction very fast whether it is legit or not, and if there is any suspicion arises, it stops immediately.

These are almost everything you need to know about hard forks. So go through all of the information before you consider it.

A soft fork is backward compatible, so it makes cryptocurrency transaction easier for the users. Soft fork usually does not need any software upgrade of nodes because most of the time, old nodes detect the change. So, a soft fork consists of these things.

• A soft fork is an update which is compatible with the older versions. It means if the user fails to upgrade their application to the current version, they won't be entirely out of the blockchain network.

• A soft fork is a change in its blockchain with the implementation of an additional function. It is not going to affect the blockchain network.

• A soft fork will be more enhanced if most users choose to update to the latest version of this software to ensure new transaction regulations on the entire blockchain.

• Updating the software through a soft fork will not be a significant change. That's because it is easily understandable by the investors because of the smooth functioning of the new and old version blocks.

A fork can be segregated in two different ways, hard fork, and soft fork. The improvisation of the software protocol on the blockchain makes it possible. All cryptocurrency forks are divided into these two types, but they do not possess any identical features which make the process unique for its user. A hard fork cannot be avoidable because it has a specific goal to improve the blockchain where a soft fork is a minor update with partial compatibility. Forks are definitely necessary in the world of cryptocurrency. It is a crucial factor for developing the crypto industry.

I have completed my Master's degree in English Literature. I have been working as a content writer for last 3 years. Now I can say that I am a successful entrepreneur and a responsible marketer. I have achieved everything with my hard work, honesty, and dedication. Though I can write about any topic, blockchain and crypto industry attract me the most. I have started my career as a blockchain writer. Gradually, I gained more experience in this field.